You can see Multan Sultans in action on 14th November 2020 in Gaddafi Stadium Lahore against Karachi Kings for the first playoff of HBL PSL 2020. You can check the PSL 2020 schedule for playoff matches and for the final match.

Son of Jahangir Khan Tareen, Ali Khan Tareen, and Alamgir Khan Tareen formed the 6th franchise of HBL PSL in 2017 and they named it Multan Sultans. Multan is the biggest city in the southern region of Punjab.

This is the first time that Multan Sultans have qualified to play the Playoffs of HBL PSL in 2020. They played their first tournament in 2018 and they were in 5th position out of 6 in that season of Pakistan Super League. In 2019, the result was the same for them they were at 5th position again out of 6.

In 2018, Shoaib Malik appointed as the captain of the team. Multan Sultan started well and they were in the top 3 at the end of the 1st round of the group stage. But they couldn’t perform well in the second round and they lost a total of 5 matches and only won 4 matches. 1 match had no result so they couldn’t qualified for the playoffs.

In 2019, again Shoaib Malik leads the team of Multan Sultans, and this time they performed even worse. The team ended up with the same position of 5/6 at the end of the tournament and couldn’t qualify for the next stage. Multan Sultans only won 3 matches and had lost 7.

During HBL PSL 2020, Multan Sultans have performed exceptionally well under the captaincy of Shan Masood. Out of 10 matches, they succeeded in 6 matches and lost only 2. Whereas 2 matches were abandoned due to rain. They qualified for the playoffs as they finished the group stages at number 1 on the points table of PSL 2020.

Now PSL is starting again, so you can watch them in action on the 14th of November against Karachi Kings. 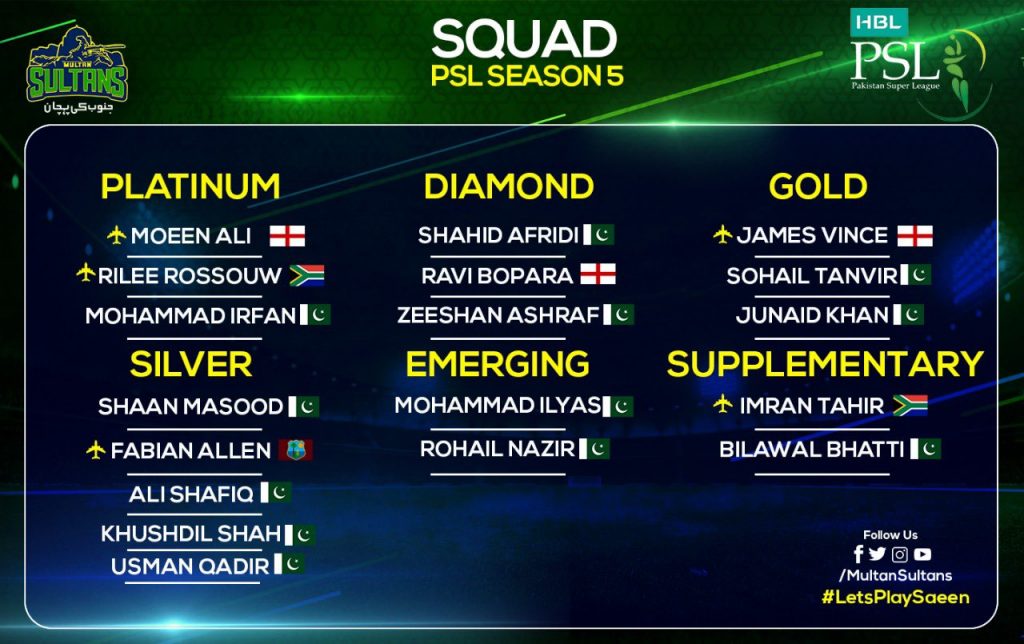 Ali Khan Tareen, who is a politician and son of another famous politician of Pakistan, Jahangir Khan Tareen, is the owner of Multan Sultans which is the 6th franchise of HBL PSL.

Andy Flower from Zimbabwe is the head coach of the team.

The former all-rounder of Pakistan, Azhar Mehmood is the fast bowling coach of the team.

Mushtaq Ahmed who is a famous former spinner of Pakistan’s national team is the assistant coach of the team and he is also the spin bowling coach.

Richard Halsall from England is the fielding coach of the team.